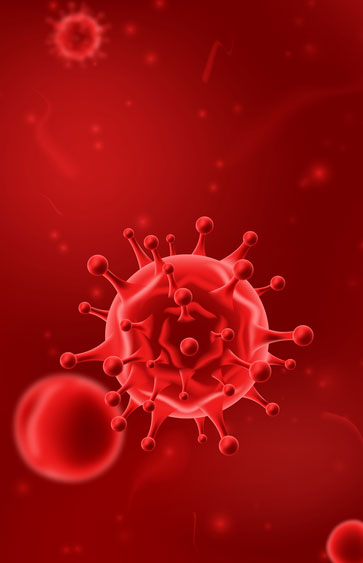 Covid-19 is a new disease, and very little direct research is currently available about its development. However, studies have been published on similar illnesses, which may be significant. One key paper from 2005, published shortly after the outbreak of SARS (Severe Acute Respiratory Syndrome Coronavirus) reported that nitric oxide inhibits the replication cycle of the virus7. Although the total number of deaths relating to Covid-19 has now exceeded those recorded during the 2002-2003 SARS epidemic, the current mortality rate is still much lower than that of SARS, which killed 9.6 percent of those infected6.

Many people have been asking why coronavirus is being seen as so much more serious than the annual outbreak of influenza. In simple terms, Covid-19 behaves very differently from flu, and it’s much less well understood. It has a very high viral load, and where flu results in a crippled immune system, this new virus attacks a very specific type of cell called a type 2 pneumocyte19,20.

Type 2 pneumocytes are responsible for the production and secretion of a molecule called surfactant, which reduces the surface tension of fluid in the lungs and contributes to the elastic properties of the alveoli. It facilitates oxygen transport to the blood, and prevents lung collapse and edema. Now imagine this function is compromised and it begins to make sense why coronavirus can be deadly for even a young, healthy person, and why it can cause damage to organs including the heart.

In lab tests using Vero E6 cells, the authors of the 2005 study found that nitric oxide has an antiviral effect, specifically inhibiting the replication of the virus during early stages of infection. Their research showed that NO inhibits viral protein and RNA synthesis – essential stages of viral reproduction in SARS.

Nitric oxide (NO) is produced in the paranasal sinuses – a group of four air-filled spaces that surround the nasal cavity. This means that by breathing through the nose, we harness various properties of NO including its pathogen-killing powers8. NO is understood to be a vasodilator – it plays a role in the dilation of the blood vessels in the lungs so that oxygen can be properly absorbed from the air. But according to a 1999 paper by scientists Lundberg and Weitzberg, another biological function of nitric oxide is the effect it has on the growth of various pathogens, including viruses. What this tells us is that nitric oxide in the nasal airways could represent an important first line of defense against infection. The existence of nitric oxide in exhaled air was first discovered in 19918. Later studies clearly demonstrated that almost all of this NO originates in the upper airways, with only minor input from the lower respiratory tract and lungs.

Nitric oxide (NO), which is inhaled in large quantities during nostril breathing, has also been proven to be important for its role in surfactant production21,22. It controls production of surfactants by the alveolar cells and preserves surfactant function – an ability that is used in clinical settings to treat premature infants23.

A paper published in 2009 by the scientists responsible for the research into the SARS virus, states that: “NO is involved in local host defense in the upper airways.” The research, which also used isolated laboratory cells, suggests that while it is unclear whether NO acts directly on microorganisms or if it works in combination with other components to produce its toxic impact, it may help to keep the sinuses sterile. Indeed, it is possible that very low levels of nasal nitric oxide in patients with cystic fibrosis or Karagener’s syndrome may contribute to their increased susceptibility to respiratory infections. Interestingly, the study found that NO inhibits the replication of SARS in two distinct ways9.

A 2013 study called Evidence for the Cure of Flu through Nose Breathing is equally affirmative, stating that nasal breathing is helpful for patients with flu10. The paper explains nasal nitric oxide is harnessed during nose breathing, and that since NO has been proven to destroy influenza viruses, inhibiting the early stages of their replication cycle, NO can kill the flu virus and therefore provide a “cure”9. This is consistent with research from 1999 and 2000 that found NO has “opposing effects”11 in viral infections including flu and pneumonia and that it inhibits the replication of a variety of viruses12. And research into the human rhinovirus (HRV), the primary cause of the common cold, concluded that humans actually produce more nitric oxide in response to HRV infection, theorizing that the gas plays a key role in viral clearance13.

Without the regular inhalation and exhalation through the nostrils, nitric oxide in the nasal airways goes unused; therefore the simplest way to naturally increase NO is by nostril breathing. However, evidence suggests that humming is effective in emptying the paranasal sinuses of accumulated NO, leading to far greater production of the gas14.
A 2005 review of nasal NO, health and disease, found that humming creates seven times more nitric oxide than normal exhalation. This was discovered by researchers Weitzberg and Lundberg in 200215, and is thought to be due to oscillations in the air, which accelerate the exchange of air between the sinuses and nasal cavity16. This fact was reiterated in a 2003 study by the same authors, which concluded: “Single-breath humming causes a great and reproducible increase in nasal nitric oxide output in healthy subjects.”14
The paper also reported that during breath holding, the concentration of NO increases to a greater extent in the nose than in the throat, indicating that the majority of nitric oxide is produced in the nose. Researchers in a 2013 trial involving nine scuba and five breath-holding divers also observed an increase in circulating NO for the breath-hold group17.

A study from 2006 found that humming was an effective therapy in chronic rhinosinusitis, a fungal condition that creates inflammation and infection in the nose and sinuses. Scientists hypothesized that, strong, prolonged humming increased the production of NO in the nose and that this eliminated rhinosinusitis by antifungal means18. While no research exists to support this idea, it may be possible that since NO has proven anti-viral properties, humming could provide a similar result in the treatment of respiratory viruses.